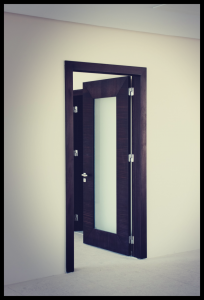 I joined a gym – not any old gym but a brand new one – so new I had to wait for it to open.

Opening Day was announced: One o’ clock on Tuesday.

What did I get? The doors opened. Now I could go in.

Of course, everything was new and all things were now available for me to use – but no ceremony.  This launch was not big. The only difference was – the doors that were closed suddenly opened. How many people went through? Twelve.

I felt a tinge of disappointment. I wanted more.

I had just been given entrance to a large room of brand new equipment, many helpers and a change of lifestyle. My only problem was that it had happened quietly.

I was missing the point.

The doors that had been closed were now opened!

Have you had that feeling that you were ‘bashing your head against a brick wall’ – that you were trying and trying but the doors were closed?

Now everything had changed.  Things that were not possible before became possible.  I had access – not to one bike but to every piece of equipment in there. The possibilities were huge.

Wouldn’t you like to see a door open in your life? You have felt what it is like for the door to be closed. Now, in a moment, there is a different feel – a resistance that has stopped, an invitation to move in – the bars, bolts and hurdles removed.

Your launch does not need to be big.  You don’t need to gather the crowd. You don’t need to be disappointed if you feel like others didn’t get it; others showed no interest and didn’t turn up. The change is in you. Something has shifted and you know it. Hold your own party for one!

This gym will be a huge success. Many will go there but I can say I was there at the start, at the launch…. at the day the doors opened.

How many were outside, waiting?