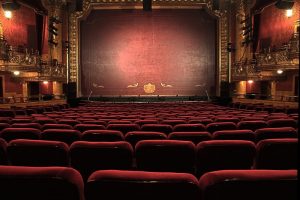 You can go anywhere in dreams! I went to the Theatre.

Through closed doors I could hear singing.

I paid for my balcony ticket and stood in the foyer. I should have climbed the red carpeted stairs on the right to claim my seat – but the show had already begun and I couldn’t get in. I had to go round the back to the door at the other side.

Not the proper entrance. Not the public view. I had been sent backstage.

Round the back was derelict. Rubble. A broken building. A building site.

I shouldn’t be here!

I had to climb through holes in partitions; make my way through dirt, dust, debris. Finally, I had to crawl on my knees to get onto the final stretch to the balcony at the other side.

Backstage, people should not be here. It is a health & safety risk.

Looking rather more shabby in my plaster-ridden, dust covered clothes I entered the auditorium, plush red with good seating. Pleasant – but only a smattering of an audience! I had made a ridiculous effort to get here in an unacceptable building.

I was left with a feeling that something was lost. How did it reach this state?

I had to ponder this further.

Would you say it was a glorious past but time had moved on and the shows here should not have continued?

Would you say it was abandoned, neglected and should be restored?

Would you say it should be demolished and the ‘ridiculous effort’ was an indicator that this should stop. I should be elsewhere?

Would you say it was time to move buildings; that the audience was in another place?

Would you say it is a picture of a place that though now a building site, will become a place for Theatre?

Would you say the Front-of-House and Stage may look good but the effectiveness of the presentation is minimal when Backstage is a complete mess? (How would this apply to an organisation or an individual?)

I shouldn’t be here!

I should not have been backstage. I was seeing things I was not supposed to see. I should not have had that knowledge – but now I knew and could not un-know it. This led to questions and a feeling of unrest.

Through all of this I heard the singer – even through the hollow, empty, derelict passages, muffled melody through walls.

All I knew was I didn’t want the voice to cease. The singer would sing – whether it would be to an astounding audience, a sparse audience or to silent, empty seats …….. because the singer had a song.