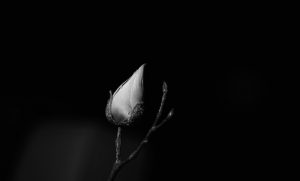 I tossed an idea

No act of pursuing

No fanning the flame

All thinking – no doing

No pain and no gain

I thought it was good

But now it’s all theory

I strangled the bud

I am reminded of a day that began with me bringing home a beautiful bunch of lilies. It is rare that I buy flowers so it was a special moment. Alas, this was short lived. I was told that this was bad news for cats – and we had two.

To cut a long story short, I ended up putting the bouquet in the bin, (Are you shocked?)

What did I feel? Grief – that they were cut off in their prime

There certainly is a time to get rid of words – but it is in the refining and redrafting – not at their birth.